So, I think everyone knew this was bound to happen. I haven't written a full-fledged review in months and the only posts that were going up with any regularity were my IMM posts. Occasionally I will toss us some movie reviews, but even those are few and far between.

The reason for all of this is that I've been in a quite a funk for the last several months and it doesn't appear to be getting any better. There's been a lot of upheaval in my personal life and unfortunately my reading and blogging have taken a hit as a result. I have read maybe 7 books that I loved so far this year, and only a few of them are YA books. I'm not reading as much as I used to, and I'm not liking much of what I do read.

So after thinking long and hard, I've decided to step away from my blog for a while. I will probably still update my Books Read in 2013 page, but I hate looking at my blog and only seeing IMM posts. I don't want anyone to think that I'm keeping this blog open just so I can brag about what I get every week. The reality is that the IMM posts are the ones that require the least amount of thinking for me to prepare.

So I hope you will understand my absence (I know I just gave you a convoluted mess to read through, and I apologize, but that's how my brain has been working as of late).  I am not deleting my blog because I do hope to return to reading and reviewing. Right now I just need to figure some things out and try to get my life to a better place.

Thank you for your patience and understanding.

Enjoy your reading!
Christi
Posted by Christi at 8:03 AM 2 comments

ARCs received from publisher to share with my teens (thank you, Little, Brown!): Two copies of Boy Nobody by Allen Zadoff, Rapture Practice by Aaron Hartzler, and Pi in the Sky by Wendy Mass! 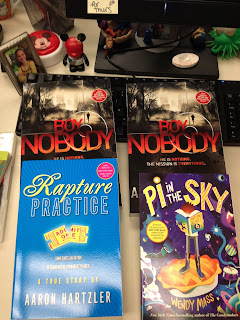 Um, yeah, that's it! I have some other movies on hold but I'm not checking them out until next weekend, so I'll add them to next week's IMM. And I have most of last week's stuff to catch up on, anyway.

A big, beautiful box of ARCs from a co-worker! She knows that I host a huge giveaway for my teens at the end of the summer: 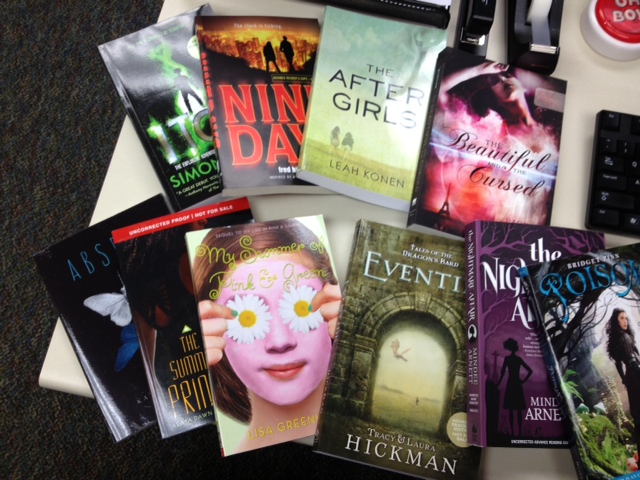 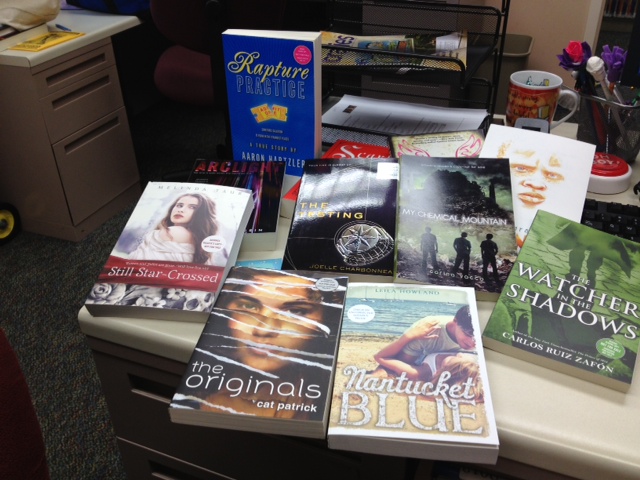 (The Originals by Cat Patrick and Nantucket Blue by Leila Howard have been on my to-read list forever, and since my nook is no longer working, these are the two I have chosen to accompany me on vacation...the timing couldn't have been more perfect!) 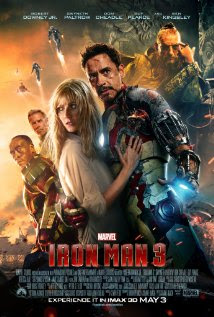 So Best Girl and I went to see Iron Man 3 on Friday. We are big Marvel movie fans--I specifically say movies because neither of us read the comics, but we do enjoy the films and the superheroes (I, especially, enjoy watching Thor, preferably shirtless. Yum.).

So this is just a brief review of the movie. We loved it.

Did you want more? LOL Truly, we enjoyed this movie from start to finish (stick around for the bonus after-credits scene!). I can't imagine any other actor succeeding in this role like Robert Downey Jr. does. His constant stream of consciousness talking is something that not many people can do well, but you can tell it's just second nature for him. The scene between Tony and the kid, Harley, he meets in Tennessee, was one of my favorites in the movie, just because of the quick-witted back and forth between the pair.

Iron Man 3 shows us a different side of Tony Stark, one that makes him seem a little less Iron and a little more man. I love Don Cheadle, so it's always a pleasure to see him as the Iron Patriot (although we totally agree that War Machine sounds way cooler). I wonder if there's been any consideration of expanding his story? Would love to see that!

And of course Pepper gets to wear the suit! I'm not sure how I feel about Gwyneth Paltrow, honestly. She's pretty good in these movies, and I get the sense that not just anyone can keep up with RDJ, so she's got that going for her. Do I think she's the most beautiful woman in the world? Um, no. But anyway, she has many of her own kick-ass moments in this movie. It's always awesome to see girls fighting the baddies right there with the boys.

The reason I opened this review with the declaration that we like the movies, not the comics, is because I'm sensing that a lot of comic book purists will not be happy with some of the events in this movie. The little research I've done suggests that the Mandarin, is a completely different villan in the comic books than he is in the movie. I can absolutely get and appreciate how screwing with a book character in a movie is totally wrong (Madge from The Hunger Games, anyone?), but for this movie, I thought the Mandarin twist was pretty cool.

So overall, we felt the movie was very entertaining and had us completely engaged from start (actually, pre-start, because they showed the trailer for Thor: the Dark World. Again, YUM.) to after-credits.
Posted by Christi at 8:49 AM 0 comments

So here's what I got this week!


In My Mailbox is a meme created by The Story Siren to showcase new books received.


DVDs borrowed from the library:
What did you get?
Enjoy your reading!
Christi
Posted by Christi at 7:42 AM 0 comments

Borrowed from the library:
What did you get?